2020 has been a challenging but productive year for Somali Public Agenda. Despite the disruptions of the Covid-19 pandemic and other problems for Somalia this year, SPA was able to navigate through and managed to publish 16 papers in total, including reports, briefs, and commentaries. Our production was four publications higher than our 12 pieces in 2019. Of the 16 publications, 10 were commentaries, 4 were governance briefs, and 2 were research reports.

In August 2020, the foundations for operationalizing SPA’s design and training portfolios were laid when SPA launched the Center for Public Policy and Service Design and Center for Learning and Development. SPA’s podcasts have increased in 2020. During the year, 11 podcasts were produced. SPA also developed three podcast programmes: namely, the SPA Governance Podcast, SPA Public Service Podcast, and SPA Forums Podcast. There have been over 1,500 downloads of the podcasts. Our Public Agenda Forum organized three events in 2020. We have developed a collaborative relationship with several institutions in 2020. Our relationship with the media has become stronger. We were regularly interviewed by many international and local media outlets. We spoke to Al Jazeera, CGTN, VOA Somali, BBC Somali Service, and several local TV and radio stations including Goobjoog and Radio Himilo.

Our work in 2021 will focus on peace, democratization, elections, and understanding contentious issues in Somalia. Studies on reconciliations in the Federal Member States, elections at local levels, and fiscal federalism among others will be the focus of our 2021 work. 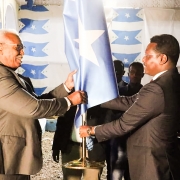 The roads to reconciliation and state formation in Galmudug have been difficult. The federal government – through the Ministry of Interior, Fed- eral Affairs, and Reconciliation – took the lead in establishing a new state for Galmudug in early 2019. It started with a 12-member social reconciliation committee that convened the 11 clans in Galmudug and helped them select the state legislators. The reconciliation of the Huurshe-Heraale conflict was a notable success of these efforts. A controversial presidential election which was boycotted by most of the candidates followed reconciliation at community levels. However, the elected president Qoorqoor led the state in a positive direction by initiating a political reconciliation process. Before his inauguration, he reached agreements with opposition politicians who had been candidates for the presidency, and former Galmudug President Haaf. ASWJ leaders left Dhusamareb after the SNA overpowered their forces. A state cabinet seen by many as being inclusive was appointed, and within a few months Galmudug saw itself playing an important role in national politics by convening conferences between FGS and FMS leaders on the subject of federal elections.

Notwithstanding these promising reconciliation efforts, the state is still fragile and the challenges it faces are numerous. Addressing the root causes of clan conflicts, managing the election of the federal MPs whose constituency is Galmudug, and security sector re- form, among many others, will define Galmudug’s future.

In partnership with Interpeace. 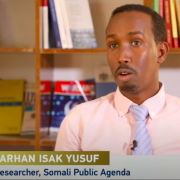