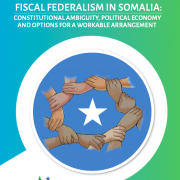 Somalia adopted a federal system in 2004 when the Transitional Federal Charter was adopted in Kenya. Since then, it has evolved into a provisional constitution, which was temporarily approved by the over 800-member constitutional assembly in Mogadishu in 2012. The devolution of power has exposed Somalia to recurrent disputes between the FGS and its constituent units over power and resource distribution. At the heart of a bitter and draining schism and bone of contention between the levels of government is fiscal federalism. This results from ambiguity inherent in the Somalia Provisional Constitution over this and other crucial matters. As this problem grows, this study sheds light on the state of fiscal federalism in Somalia, and the challenges that stand in the way of a workable agreement. However, it also proposes practical models and recommendations in resolving the existing disputes over fiscal federalism.

The process of drafting a federal constitution for Somalia dates back to 2004 when a Federal Charter and a federal system of governance were adopted in Kenya. The Transitional Charter mandated the formation of an independent commission that would prepare a new federal constitution in two and half years. However, the commission was only formed two years later, in 2006, by the Transitional Federal Government (TFG) president, Abdullahi Yusuf. END_OF_DOCUMENT_TOKEN_TO_BE_REPLACED