Milking the Somali government: the politics of the status quo 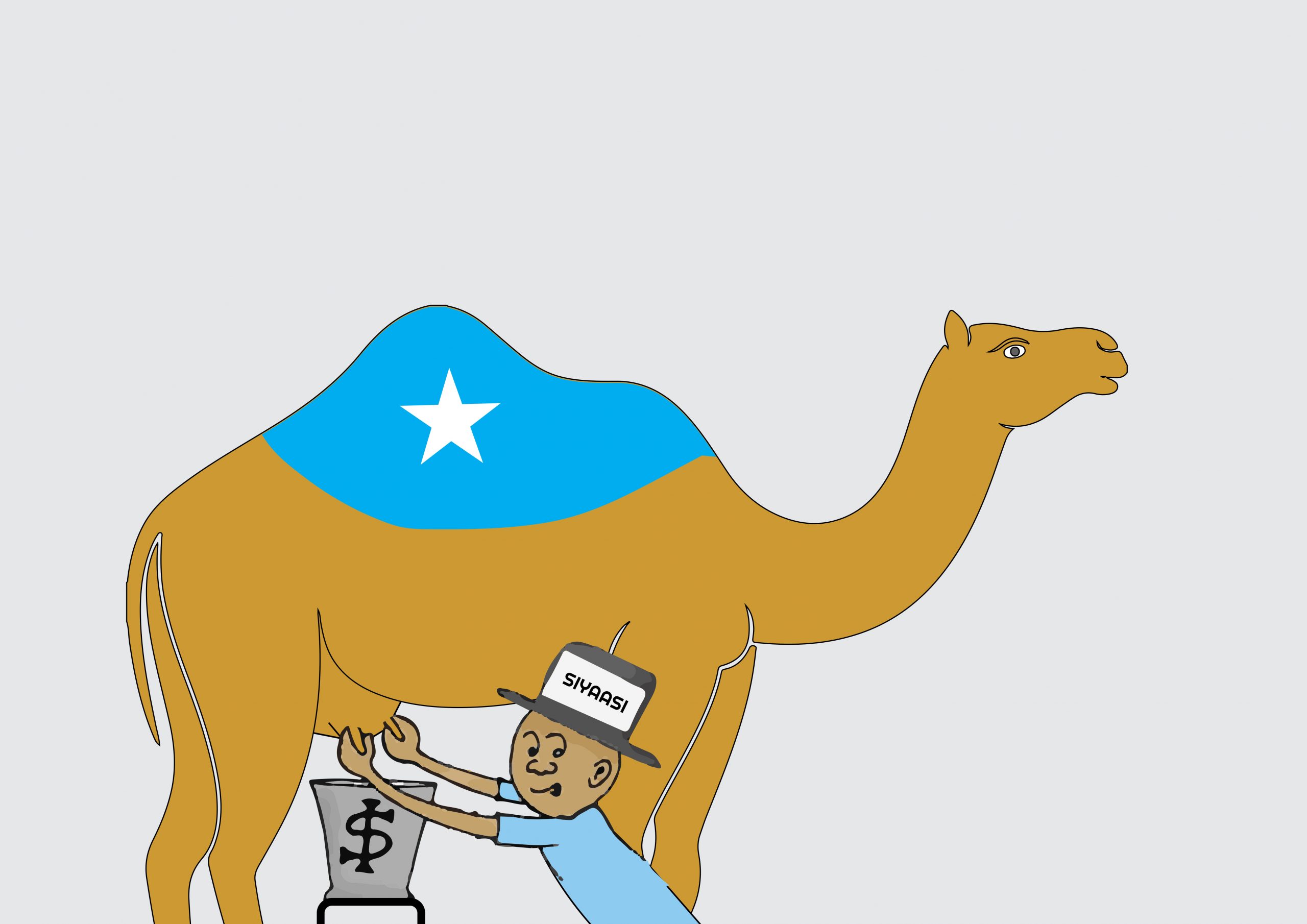 A depressingly familiar cycle has become set in Somali politics. Indirect electoral processes take place every four to five years. New faces come to power. Former officeholders join the opposition and fight for a return to government. Citizens have high expectations at the beginning of every new administration, but these soon evaporate once new rulers settle into their offices. “Citizens’’ realize that nothing has changed in their lives other than one set of kleptocratic politicians has traded positions with another. In the meantime, the next electoral cycle begins and people are yearning once more for transformational – rather than transactional – leadership. The incoming administration more often than not fails to reform Somalia’s crippling government and continues the same practices of its predecessors. This process is what political scientists describe as state capture.

Against this backdrop, I argue that Somalia’s political class doesn’t care about reform(s) because its members are comfortable with the unruly status quo of the country’s politics. This allows them to accumulate both financial riches and political power. Flawed electoral processes that enable privileged politicians to come to power (or simply grab it), an international community that pours money into the government, and a lack of accountability have created a culture whereby politicians milk the government and enrich themselves.  This has certainly been the pattern over the past decade or so, but the roots of the problem run deep.

After every four to five years, a new president is elected by a parliament that itself comes to the office through indirect elections. These tend to be heavily manipulated and stacked in favor of elites within the incumbent Federal Government of Somalia and the leadership of the Federal Member States. Sitting presidents have all vied for re-election but no incumbent president managed to get elected for two consecutive terms.

In May this year, a protracted electoral process produced a (semi) ‘new’ president, Hassan Sheikh Mohamud – he had previously been Somalia’s president between September 2012 and February 2017. He is in alliance with familiar and known politicians who campaigned and supported his candidacy feverishly. Responding to the rumor mills in the capital that his ‘bus is already full’ – meaning that he had already doled out key appointments in his future administration – Hassan Sheikh’s candidacy speech pointed out that he ‘drives a long train’ with plenty of seats on board.

Hassan Sheikh Mohamud appointed Hamsa Abdi Barre, a loyal member of his UPD party, as his Prime Minister. The PM nominated a 75-member cabinet, consisting of a deputy prime minister, 25 ministers, 25 deputy ministers, and 24 state ministers. More than half of this cabinet are members of the new federal parliament. Almost all cabinet members are politicians who have been active in Somalia’s dysfunctional politics in the past several years. In short, the old regime vacates offices only to be replaced with familiar faces who were unable to deliver meaningful reform in the past.

With a mandate of 4 years, the priorities of the new administration are almost identical to those of its predecessors – highlighting how little progress the federal government has made with state-building in Somalia. Security sector reform, the fight against al-Shabaab, the constitutional review process, improving relationships with the Federal Member States, reconciliation, economic reform, and advancing the democratization agenda are (again) the key priority areas. Hassan Sheikh Mohamud’s new cabinet dubbed itself ‘DanQaran’, meaning national interest. It submitted to parliament a programme with six political goals: re-liberation (of al-Shabaab-held territories) and maintaining law and order; creation of an independent judiciary; domestic reconciliation; economic recovery; improving social services; and peaceful relations with the outside world. As the record of past federal administrations has shown, it is unlikely that the current government will achieve these ambitious goals – meaning that whoever comes after HSM is likely to be forced to address these same problems, albeit with a new political slogan.

Why Somali elites are happy with the status quo

Although the new government’s priorities are noble and make sense on paper, politicians in Somalia have often failed to deliver. There is little motivation to undertake real wide-ranging reforms in critical areas such as widespread unemploymentpervasive insecurity, and continued challenges to mobility in the country. There are three reasons why the status quo of continued state fragility serves the interests of the political class – both those who are in power and those who are awaiting their turn.

First, politicians invest a huge amount of money to get elected to parliament or appointed to government positions. The election of federal members of parliament has been severely commodified, involving a series of cash payments to buy votes at different levels – from the elders who handpicked delegates to the electoral bodies and the leadership of Federal Member States. These MPs have received cash during the presidential elections since 2012 in exchange for their votes. For many of these parliamentarians, the money they spent on winning their own seats is little more than an investment for the subsequent presidential election during which they can recover their costs and make a profit, over and above the cash spent during their campaign.

Paying cash to obtain a position of power is not, however, limited to parliamentary and presidential elections in Somalia. Politicians who are power brokers play a role in using cash or bribes for appointed seats. In some cases, aspiring office holders who seek to be appointed to a cabinet position or become a member of a particular commission pay money directly to the individuals in charge of these appointments or their close aids. In other cases, they use a broker – politicians who act as intermediaries. Appointments for key offices that involve a sizable budget and donor funding/programmes or that come with benefits such as high salaries paid by the international community are also prone to cash payment. Sadly, it has become normal in Somalia to see individuals seeking posts because they know certain donor-funded projects are managed under that office.

Second, policymakers are gatekeepers for the management/disbursement of international aid. The federal government in Mogadishu has both the de jure and de facto mandate to represent Somalia in international politics. Politicians of the federal government and the federal states are the main gateways for the donor community who want to operate in Somalia. Without the cooperation of Somali officeholders, international organizations are unable to implement their projects. Somalia heavily depends on budgetary and project support from the international community; 73.2 percent of the 2022 federal government budget is expected from donors through project support ($485.5 million or 52 percent), while budget support constitutes around 22 percent ($209.2 million). Sadly, aid resources often remain within the government and little reaches the intended beneficiaries. This is one reason why domestic revenues are only increasing at a slow rate – there is little motivation to raise taxes from the population as long as external aid rents are available to the government. People are also understandably reluctant to pay taxes as they get little in return.

Third, there is and has been little accountability in Somalia’s public sector. Politicians misappropriate public funds with little fear of accountability or legal consequences. Clan representation (the 4.5 formula) and clan-based appointments and employment are applied in almost all public offices. This significantly weakens accountability in Somalia. Independent investigations on the misuse of funds and efforts to make public officials accountable are continuing to fail because every person in government represents a clan. This includes members of the anti-corruption commission and anti-corruption inquiries/efforts may be construed as clan rivalry. Further, civil society is not organized enough to hold the government accountable. Citizens had no say in electing their representatives and often lack information on the backdoor dealings that characterize Somali politics. Hence, accountability is almost non-existent.

These three dynamics point to the fact that Somalia’s political elites have arranged themselves rather comfortably with a status quo of failed state-building. They come to power through indirect ‘elections’ and are gatekeepers of international funding, and there is no authority to hold them accountable. This is why the privileged few in Somalia are incredibly rich while the majority of the people they represent suffer and die of thirst and hunger.

Who, then, has an interest in changing the status quo? Politicians in power are eating their proverbial cake while other politicians are shouting from the outside, seeking their own opportunity to benefit. Moral or political principles are not in Somalia’s political dictionary. There is a need to change this status quo to benefit the majority of Somalis (the ‘masses’). However, there is a fundamentally entrenched elite that has come to live rather well with the current situation.

When Somalia became independent in 1960, a Somali poet – Abdullahi Qarshe –  composed a poem concluding with the famous phrase ‘let us milk our Maandeeq she-camel’. This meant that Somalis now finally had the freedom to run their own affairs. However, the poet probably missed the opportunity to add another line and say ‘let us feed the Maandeeq first and then milk it’. Since independence, politicians in power have been milking the government. Rarely do politicians think about feeding the government by working for the common good and delivering rudimentary public services. Instead, almost everyone wants to ‘milk’ the government for personal gain. The international community is enabling the Somali political elite to milk Somalia by pouring funds into a political system or governance structure, in which individuals use public resources for their own ends.

Changing the status quo would require a holistic approach. First, citizens’ voices need to be amplified. Efforts to empower citizens to directly elect their federal representatives and state leadership must be prioritized. This could probably start with direct elections of municipal authorities in main cities such as Mogadishu. These must represent citizens’ demands and pressure rather than the elite design and manipulation of ‘local elections’ in their favor. Only then will elected officials be accountable to citizens. Second, citizens need to change their kinship views on the political elite. Because of clan-based representation, many Somalis do not complain when it is their clan member milking the government as commodified politics transcends political ideologies. Third, establishing an independent judiciary (which is one of the priority areas of the new government) and advancing meritocratic recruitment of civil servants (including the Director-Generals) at both federal and state levels should be a key pillar of the state-building efforts in Somalia and the support of the international community as this may be a step towards abandoning the clan-based logic of representation.

Mahad Wasuge is the Executive Director of the Somali Public Agenda.