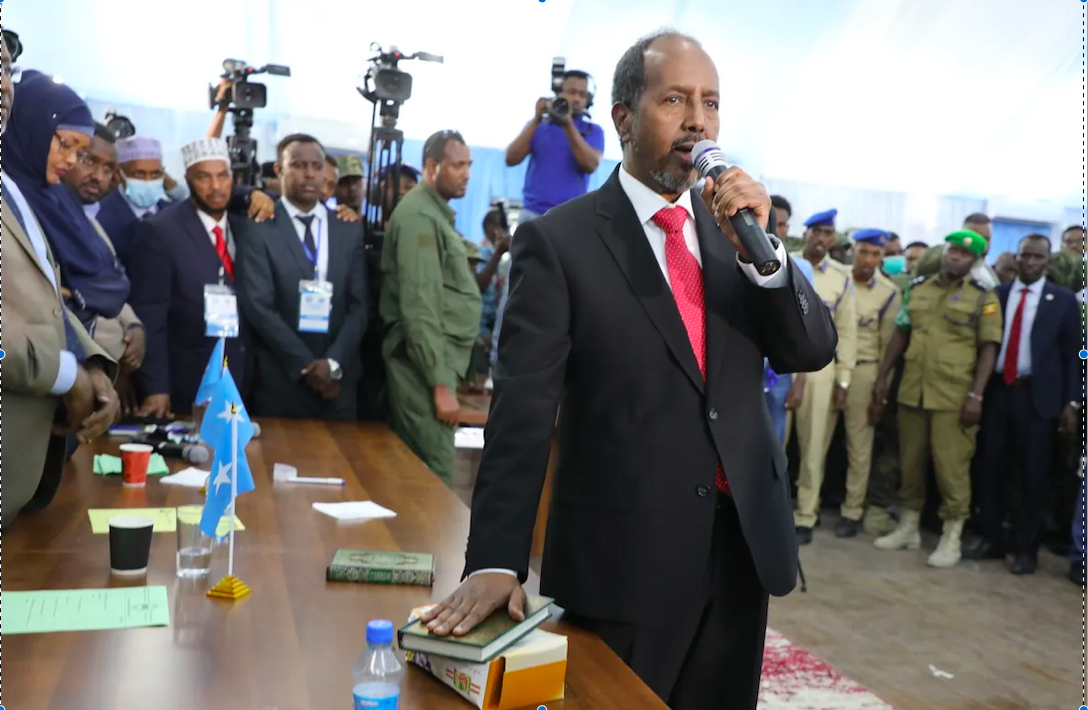 On 15 May, in a highly contested vote by new Members of the Somalia Federal Parliament, Hassan Sheikh Mohamud was elected as Somalia’s 10th President. In the election’s third round, he received two-thirds of the votes, decisively beating the incumbent Mohamed Abdullahi Farmaajo who Hassan Sheikh had lost to in his re-election bid in 2017. This is the first time in Somalia’s history that a former president has been re-elected. It marks the end of a delayed and controversial election process for the country’s parliament and executive that has been going on for over a year. This commentary assesses why Hassan Sheikh won, and what his prospects are for solving many persistent problems, and argues that the new president needs to focus on addressing these issues and not re-election over the next political cycle.

Over the past five years, under Mohamed Abdullahi Farmaajo’s presidency, the federal government, among other things, accelerated the debt relief process and security sector reform that brought biometric registration of security forces and regular on-time payment of salaries for government employees. However, the relationship between the federal government and regional governments has deteriorated, the president and the prime minister have been at loggerhead for the past year, and despite the election law being passed, long hoped for one-person-one-vote elections never materialized. The populist Farmaajo left office with much admiration among many segments of the public, and would perhaps have had a better chance at re-election if citizens had been able to vote for the president (although according to the constitution, citizens ideally elect their representatives at the parliament who elect the president). His successor, Hassan Sheikh, was elected this month not because he was a favorite candidate of the public but because his predecessor isolated the majority of political elites.

Hassan Sheikh takes over a new term of leadership in a country that continues to face major challenges. These include a volatile security situation, disorganization among security forces, deteriorated relationships between the federal government and the regional ‘federal member states’, macroeconomic instability, and dependence on donor aid. These issues are also influenced by the Horn of Africa’s turbulent geopolitics, considering civil war in neighboring Ethiopia, and external states jostling for influence in the region. Can Hassan Sheikh deliver on his second time around? Or will he be dogged by the same problems faced both by his predecessor and by himself in his previous term of office?

Born in the Jalalaqsi district in the Hiiraan region in 1955, Hassan Sheikh built a career as a civil society activist, researcher, and teacher before he was elected as president in September 2012. He has cultivated a reputation for being a conciliatory leader who respects democracy – demonstrated by his peaceful relinquishing of power to Farmaajo in February 2017. He may prove capable of getting closer to the long-awaited one-person-one-vote elections in Somalia, as the two previous elections have all been indirect, involving clan elders and delegates selecting MPs who in turn have elected the presidents.

When I met him in 2019, he talked about how he saw the role of clan elders in Somali politics and how the Federal Member States should replace the pre-1991 regions – a state reconfiguration process that he (more or less) finalized during his 2012-2017 term. Out of office for the last five years, Hassan Sheikh managed to retain the support of most of his political allies, who had primarily entered politics when he came to power in 2012. Other key figures also joined the Union for Peace and Development Party (UPD) he leads.

Hassan Sheikh performed relatively well early on in his first presidential term,  clearing dozens of illegal checkpoints inside Mogadishu. During his tenure, four new Federal Member States (Jubaland, South West, Galmudug, and HirShabelle) were established. He managed to establish good working relations with the regional leaders who co-led the 2016 indirect elections with him under the National Leadership Forum. Badly needed security sector reforms were initiated during his tenure, while financial reforms paved the way for the debt relief process that Farmaajo’s subsequent government continued and got most of the credit for. The last significant AMISOM and Somali National Army offensive to capture substantial amounts of territory from al-Shabaab was undertaken under his tenure in 2014.

Nevertheless, Hassan Sheikh’s government was continuously dogged by allegations of corruption and misappropriation. Troops frequently went without pay. The establishment of the Federal Member States was chaotic and occurred before a consensus was reached on how federalism would function in Somalia. Limited progress was made with the constitutional review process and long-awaited one-person-one-vote elections were abandoned in favor of an indirect electoral process. Moreover, political disputes within his government led to a turnover of 3 prime ministers during his term.

Retaking the presidency, Hassan Sheikh will face numerous challenges, some of which have been exacerbated during Farmaajo’s 5 years in power. First, al-Shabaab continues to pose a huge security challenge to Somalia. They collect taxes in government-controlled urban centers, attack government institutions, and infiltrate government services despite 15 years of internationally-funded counter-insurgency. The security institutions also require further reforms. Since the rift between President Farmaajo and Prime Minister Roble intensified, the defense and security ministers appointed by the Prime Minister had no working relationship with the commanders of the security forces who sided with the president.

Second, government institutions remain heavily dependent on international aid. Domestic government revenue collection is highly limited. Moreover, a lack of agreed fiscal federalism and power allocation arrangement underlies recurrent power struggles between Mogadishu and the Federal Member States. The Gulf crisis in 2017 and the FGS and FMS’s different approaches and relationships with the UAE and Qatar have also contributed to the deterioration of the center and periphery relations.

Third, Somalia’s alliances shifted during the past few years with Somalia, Ethiopia, and Eritrea leaders entering a tripartite agreement. Somalia’s relationship with Kenya (and to some extent Djibouti) has worsened. The past administration’s closer relations with Qatar negatively affected Somalia’s diplomatic relations with the UAE and Saudi Arabia. Establishing diplomatic relationships with neighboring and other countries would also require urgent attention from Hassan Sheikh’s government.

Although the provisional federal constitution does not stipulate any term or age limit for the sitting president, whether or not the new president seeks re-election after four years may be decisive for his ability to focus on overcoming the challenges ahead and delivering tangible work. By the presidential race of 2026/27, Hassan Sheikh would be 71 years of age. Making a firm commitment now not to seek re-election would make him different from other former presidents. This could help him focus on key policy agendas and advance Somalia’s democratic mechanisms without suspicion of ulterior power-seeking motives. This could leave a lasting legacy for Somalia.

The new President has ample prior experience. He would skip the initial adjustment stage that new presidents go through. In 2019, Hassan Sheikh told researchers who met him that he needed one more term. If he remains consistent and resolute with that decision, under his leadership, the Federal Government of Somalia (FGS) could make tangible progress in the next four years. Ironically, what hinders progress in Somalia is partly that the incumbent feels that the four-year mandate is not enough and presidents spend significant time and resources (particularly in the last two years of a term) on re-election (or term extension, in the case of the last government). Their election bid often distracts focus away from national priorities and towards manipulating the electoral processes and FMS leaderships so that the election design and institutions favor the re-election of the incumbent. However, that approach has always failed for incumbent presidents (including Hassan Sheikh in 2016-17).

By explicitly committing not to seek re-election early on in his second term, he may be able to achieve significantly more in the next four years. He has got the opportunity to get elected to the highest office twice; this has never happened before. He should capitalize on the opportunity and learn from past mistakes. If he focuses on his re-election bid, particularly in the second half of his term, we may well see the familiar disputes and delays around electoral system reform and witness Somalis celebrating his defeat and final exit in the 2026/27 presidential elections. Good luck to him.

Mahad Wasuge is the Executive Director of Somali Public Agenda.