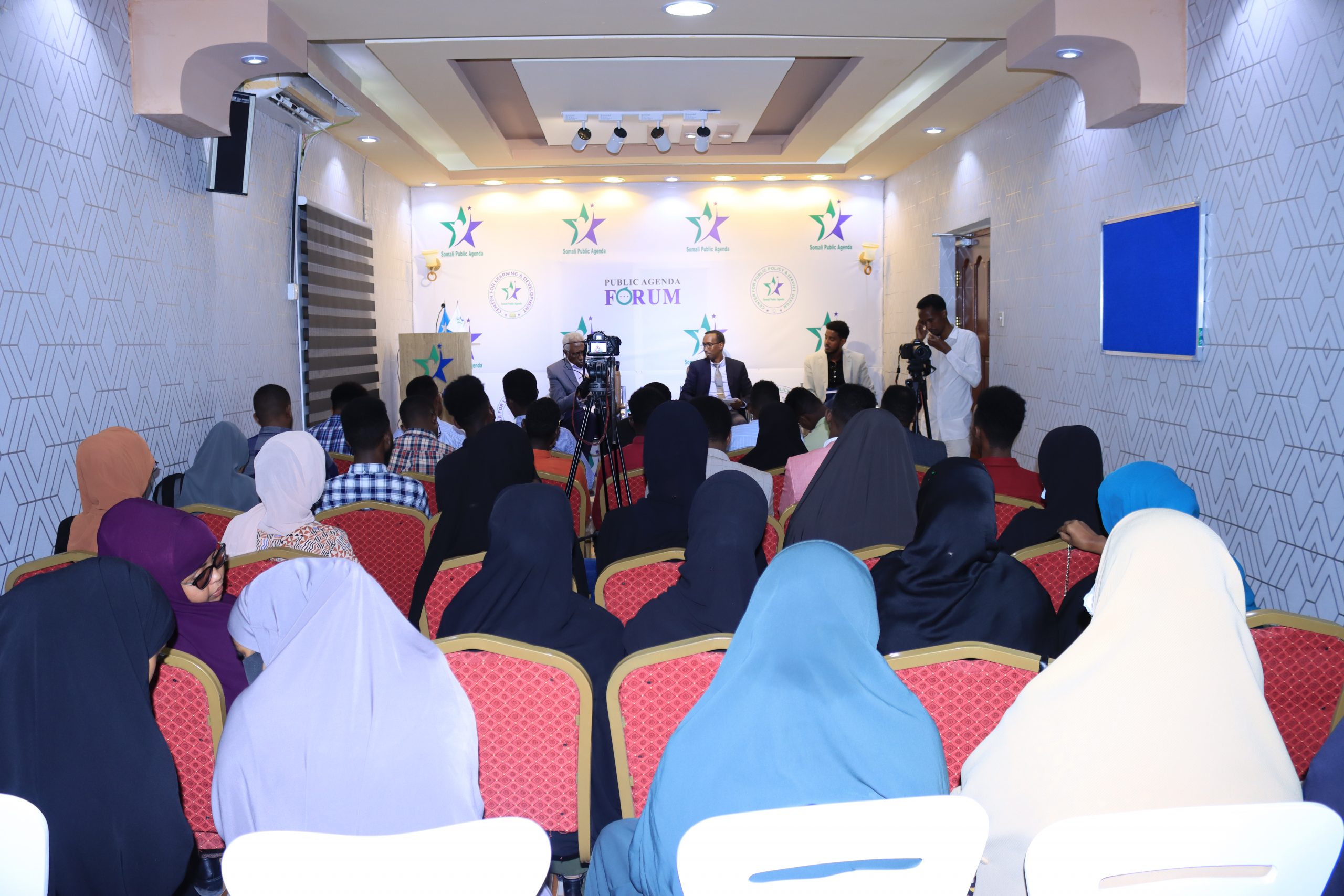 Somalia’s health status indicators have long remained at the bottom of the table of lower-income countries. This situation even predated the collapse of the central government in January 1991 and the subsequent civil war. Some of the health problems that exacerbate the weakness of the country’s degraded healthcare system include a weak economy, frequent droughts and famines, and poverty. Additionally, another major limitation of the healthcare system is the absence of a strong regulatory body on drug import and use.

As a result of highly inadequate health care services in Somalia and the scarcity of knowledge, skills, and legal instruments by the health workforce, preventable and common diseases are the leading causes of children’s deaths. Despite ongoing armed conflicts, insecurity, and the country’s staggering maternal mortality rate figures, little was invested in the public health sector in the 2022 federal government of Somalia (FGS) budget that was approved on June 30. Additionally, much of the health budget is donor-funded and has little direct funding from the federal government’s domestic revenue.

Somali Public Agenda (SPA) held a forum on the decentralization of essential public health services to Benadir Regional Administration (BRA) on July 28, 2022. The discussion came at a crucial time that marks one and a half years after these services were decentralized to the local Benadir authority. Key stakeholders attended the forum including representatives from the BRA Health Directorate, the FGS’s Health Ministry, BRA districts’ health officers, Mogadishu’s public hospitals, the BRA health supporting donors, and members of health associations, academicians, and some ordinary people (beneficiaries of health services). In addition, Mohammed Addow, who is the Director of the BRA Directorate of Health and Human Services, and Mohamed Jama ‘Baidoa’, adviser to the Ministry of Health and Human Services, were guest speakers at the forum. About 50 people attended. This commentary analyses some of the key issues discussed in the forum.

The History of Health Decentralization in the Benadir Region

Before the central government collapsed in 1991, the military government’s Ministry of Health, similar to other public services, single-handedly managed the health sector in Somalia. After the fall of the government, many new stakeholders emerged including regional authorities (such as Puntland), private hospitals, international and local organizations, and other health facility centers, which were neither regulated nor controlled by any government or local administration.

In addition, after the beginning of the establishment of federal units in 2013, the Federal Member States (FMSs) took over the administration of the public services. As part of the FGS’ efforts to fast-track decentralization of the public services to the FMSs and the Benadir Regional Administration (BRA) — whose status is yet to be decided — the FGS Ministry of Health handed over the essential public health services to the BRA on February 7, 2021. This move followed a decentralization process similar to the education service, which was transferred to the Benadir Regional Administration on 9 August 2020.

The FGS Ministry of Health’s decision to hand over primary health care to the local authority was a result of long discussions between the BRA and the Ministry of Health on how the essential public health services in the Benadir region could be improved according to BRA health and human services director. Both parties agreed that for the efficiency and productivity of public health services to be increased, decentralization was a necessity. Moreover, the decision was meant to facilitate coordination at different levels of the BRA — regional, district, department, and health centers — to take decisions easily and respond decisively during emergencies.

The Role of the FGS Ministry of Health

Before the transfer of the essential public health services from the FGS Ministry of Health to the BRA Health Directorate, the ministry was in full control of all the different health sectors in the Benadir region, such as hospitals, maternal and child health (MCH) centers, and all other public health facilities. Additionally, these health facilities used to send reports and other health-related information directly to the Ministry of Health.

Following the health service decentralization, the FGS Ministry of Health mainly plays a policy-making and oversight role. According to a senior advisor to the Ministry, its role is to formulate and direct strategies, policies, regulations, and protocols for the BRA Directorate of Health and Human Services, while the latter is in charge of implementation so that they can achieve universal health coverage, led by the Ministry of Health.

Furthermore, the Ministry regulates the whole health sector, such as controlling imported medicines to the country to ensure their quality and effectiveness. However, that system is not yet well established and is not working properly. On the other hand, the Ministry of Health, according to one of its advisors, consults with the BRA Health Directorate about decisions and policies that affect them before they are taken.

However, some participants of the health forum argued that the BRA is not yet fully independent of the public hospitals in the Benadir region and that it still sees interventions from the Ministry of Health. The contributing factors to this relate to the complex interplay between the powers of the BRA and the FGS, which have yet to be separated clearly in the provisional constitution.

The Current Status of Public Health in the Benadir Region

The Benadir region is considered to have some of the best and most well-equipped hospitals in Somalia. However, these hospitals are mostly privately owned, and the vast majority of the population cannot afford them due to extreme poverty. According to the United Nations Office for the Coordination of Humanitarian Affairs (OCHA), nearly 7 of every 10 Somalis live in poverty.

According to the director of the BRA Directorate of Health and Human Services, Mohamed Addow, the Directorate controls 69 health centers across the Benadir region, which provide primary health services. In addition, these health centers report back to the Directorate using the District Health Information System 2 (DHIS2), the world’s largest health information management system, used by more than 73 countries worldwide for collecting and analyzing health data.

The BRA Directorate of Health also controls six stabilization centers that provide in-patient care for malnourished children and eleven tuberculosis (TB) treatment centers. All these public health centers report back to the Directorate daily, while the Directorate reports to the FGS Ministry of Health monthly, quarterly, and semi-annually.

While the figures that the director cited are promising, they are nowhere near enough to cover the needs of the millions of residents of the Benadir region. Moreover, Mogadishu is one of the most fragile places in the country in terms of security. Therefore, further public health care is highly needed.

A significant change has yet to be seen one and a half years after the handover of essential public health services to the BRA. Moreover, some participants of the SPA forum on health service decentralization expressed their dissatisfaction with the services that are provided in most of the public health centers in the Benadir region, while the costs associated with the health provision by the private sector are high and a large portion of the population cannot afford them.

Despite these challenges, the BRA Health Directorate has made some achievements since it took over the essential public health services last year, as illustrated by Mohamed Addow. The establishment of a center for Covid-19 vaccination is a new initiative introduced by the Directorate. Also, four new health centers were built in the peripheral areas, such as Garasbaaley and Dayniile, where many internally displaced peoples (IDPs) live who can’t usually afford to access health care.

Additionally, a state-level warehouse was built, in which logistical supplies and medicine for the public health centers are kept. On the other hand, a public health emergency operations center to monitor health emergencies such as outbreaks is planned to be introduced, according to the BRA health director. This center is expected to boost the readiness of the health directorate in case of outbreaks in the region, and its dire need was felt during the spread of Covid-19 in Mogadishu in 2020.

Having taken on the public health responsibility of the most populated city in Somalia, the BRA has put a huge burden on its shoulders. Moreover, public health is an important pillar of the already decrepit and neglected social services in the country. There are few public hospitals in the Benadir region in particular (and Somalia in general) that have the capacity and equipment to receive such large numbers of patients every day.

In addition, the region has a large number of internally displaced people (IDPs), whose numbers are estimated to be 40% of the overall 1.2 million IDPs in the country. However, this figure could be higher due to the new IDP arrivals who fled from the extreme drought that hit the country this year.

Finally, there is widespread skepticism and distrust of public health facilities. During the SPA health decentralization forum that we held in Mogadishu, some participants argued that many people do not believe in public health centers and their services and that these people go to private hospitals instead. Furthermore, there is a large population that does not believe in science; instead, they seek traditional, herbal, and “religious” healing alternatives. This has resulted in the establishment of a string of dubious  “religious healing” centers across Mogadishu.

Access and Affordability: To improve the fragile health sector in the Benadir region and make essential public health services more accessible, secure, and trustworthy, the BRA should increase the number of public hospitals in the Benadir region. Their costs should be lowered, considering the region’s ever-growing population and the average income of the majority of the residents.

Employment of the Local Medical Professionals: Private hospitals and health centers should employ the unemployed Somalis who graduate each year from local universities on a meritocratic basis. Apart from being an employment opportunity for these new health workers, they can also help improve the health sector, which faces numerous challenges, including the language barriers that come with the increasing number of foreign health professionals. Although most foreign doctors from countries like Turkey, Syria, Egypt, and Sudan who work in major hospitals in Mogadishu have translators, the accuracy of the translation and how patients understand the information remains a challenge.